A mixture of plant with a unique formula combines the world of 6 plants with exceptional properties for the organism of human living in XXI century (the century of enormous rush and hurry). The element of stress and increased tension accompanies us already during studying, working and very often its climax is reached after retirement. More and more often we grapple with exasperation, anxiety and fear. These factors do not allow us to enjoy the fact that we live here and now.

The world of plants comes to our aid, so it is worth to get acquainted with the recipe of a next product from the series VIRUMIN – i.e. VIRUMIN ANTYSTRES. Polish producer P.W.M. GAMA from Bedzin developed this unique recipe with a special care. The composition of this recipe includes: RHODIOLA ROSEA often called the golden root – this unique herb grows at high altitudes in the arctic regions of Europe and Asia. Soviet scientists knew that this herb (native to them) contributes to the optimal mental and cognitive activity. Rhodiola rosea helps to restore the balance by acting as an adaptogen, which strengthens the body’s response to physical stress. Moreover, scientific researches showed other benefits of Rhodiola rosea. It helps to increase the attention and prolongs the time to focus on tasks requiring concentration.

CHROMIUM helps to maintain the normal metabolism of macronutrients and the normal blood glucose level.

RHAPONTICUM CARTHAMOIDES is the second component of the mixture VIRUMIN ANTYSTRES. It belongs to the category of rare endemic and endangered plants. In the natural state, it grows in glades of the Altai Mountains in Siberia, northern Mongolia and eastern Kazakhstan. Immutability of growing season for this plant in extreme conditions was secured by phytoecdysteroids and other accompanying substances. The first biochemical and clinical studies were carried out in 1947, but the world learned about the importance this plant after the Olympic Games in Seoul (1988), where Soviet athletes won the majority of medals (132). The preparation from this plant’s roots under the name ecdysten was called a “secret weapon of Russians”. This is nothing surprising that Russians have been fascinated by this plant. Rhaponticum carthamoides is a regenerating product to maintain body functions – it strengthens the immune system, improves the condition of cardiovascular system, tones the body, stimulates mental abilities to work, increase the adaptation of the body in extreme and stressful situations. This plant is an excellent food ingredient for knowledge workers, whose effort in connected with the remembering a large amount of information and concentration of attention.

BUCKWHEAT HULL is a component originating from Polish crops. Buckwheat hull has a high content of flavonoids, among others, rutin and quercetin.

MELISSA OFFICINALIS is one of the most popular herbs for sleep and sedation. Infusions of its basis are used in states of nervous agitation, exasperation and stress. This plants owes a sedative among to components of essential oils such as, among others, cariophyllene and citral. Melissa supports cardiovascular health, as well as promotes natural hormonal balance.

ROOIBOS – it does not contain caffeine and can be drunk by everyone regardless of age. It contains polyphenols.

Adding lemongrass, lemon peel and orange peel to the VIRUM ANTYSTRES mixture, because of the content of the Limonene oil, gives it an exceptionally subtle and pleasant taste.

Put a bag of VIRUMIN ANTYSTRES in a cup or a mug and pour freshly boiled water (not boiling water) over it. Water temperature approx. 100°C. Brew for 5 to 10 minutes.

Brew a cup or mug

The temperature of approx. 100 degrees Celsius.

Three times a day – one sachet (three portions of infusion of 250 ml), preferably 30 minutes before each main meal. Store in a dry place at room temperature.

Protect from light. Keep away from children.

NUMBER OF PORTIONS IN A PACKAGE:

Packaging made from natural materials:

cotton, leather bottom. You can be used to store porridge, rice, beans and so on. 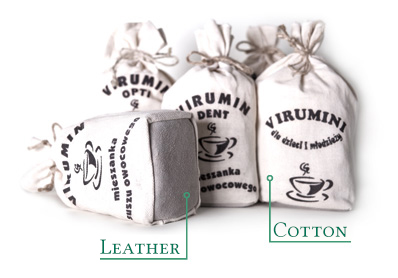 The product and its name are registered in the Patent Office.